Some trucks from ZDF - a german public TV channel - parked next to our offices today. One of them had a QR code on it that I scanned with Google Goggles.

It takes me to a page that redirects me to another page which is supposed to be a video - which I never saw because it returned a Page Not Found error. (see image)

The Bad Thing
I and everyone else who scans that code won't see that beautiful(?) video that they made. (I'm not sure though, why they send my IP address in the query string because they get it anyway - I replaced it with "127.0.0.1" in this URL)

The Good Thing
Supposedly, they have control over the content at that URL which returns the error and they can simply fix that. :)

Another Bad Thing
The date in the URL (July 13, 2011) could mean (1) that they either don't have control over that content, (2) that they removed it without noticing that it broke the QR code or (3) that they terminated the contract with Limelight Networks - the company hosting the content.

My tip for the next time: Create a QR code for http://zdf.de/qr/p7Lgqo_. It only has two additional characters and you have total control over where the URL is pointing to which makes you independent of any content hoster and it looks a lot less suspicious when seeing the URL in the QR code scanner app. (bit.ly can_ be used by anyone - yes, even by bad people)

In any case, good luck fixing that to +ZDF. At least there's always the possibilitiy of repainting your truck(s). :> 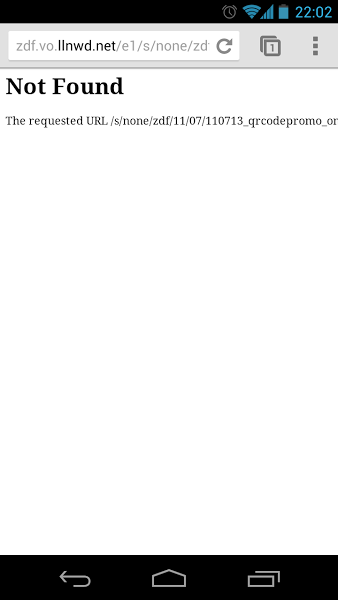